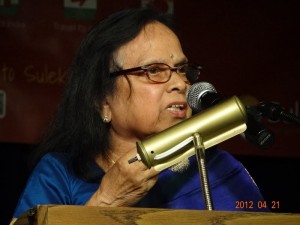 Dr. S. Vijaya Bharati is a granddaughter of Mahakavi Bharati; she is a daughter of Thangammal Bharati, Bharati’s eldest daughter.

She completed her doctorate at Annamalai University, where she carried out seminal research on Bharati. Her thesis was the first doctoral thesis dedicated to Bharati’s works, and it was later published as a book, A Critical Study of Bharati’s Works. She continued her research in England at the School of Oriental and African Studies, University of London, and in Canada at the University of British Columbia in Vancouver.

For the past 4 decades, she has been living in Canada. She has travelled widely, and has lectured on Bharati, his life and works, in Canada, the United States, Australia, the United Kingdom, France (Paris), Malaysia, Singapore, Sri Lanka, and Mauritius. Read More